At the recent Cabsat, the media, broadcast and entertainment week held in Dubai, Emirati filmmaker and Canon brand ambassador Nayla Al Khaja was present to introduce the new C700 ­cine camera. In a manner that is customary with Al Khaja, uttered in that special tone at once empowering and unassuming which we who know her have gotten used to, she admitted that things might have been easier for her as a pioneering filmmaker in the Emirates, because, in the very beginning “people would feel sorry for you as a woman.” It is exactly this humble streak and her self-assured yet dismissive ways when it comes to her own extraordinary accomplishments which make her one of my favorite women, but also one of the most beloved filmmakers in the Region.

Groundbreaking should be Al Khaja’s middle name. She is one of only a handful of film directors in the UAE and the first female producer in Dubai. In 2005, she founded D-Seven Motion Pictures, a full service production company specializing in film, TV, commercial, and branded entertainment. In 2007, Al Khaja launched Dubai’s first film club The Scene Club — screening the best cinema has to offer, often unreleased, independent films that are impossible to view in the UAE, particularly uncut. That enterprise has, in the past ten years, grown from a mere 50 members in its first year to over 10,000 registered members.

But at the heart and soul of Al Khaja’s work lie her directing efforts. Watching one of her short films provides the viewer both with insight into Emirati culture, always a treat, as well as a peek into our humanity. Within 15 quick minutes, which go by even faster when watching gems like Al Khaja’s latest ‘Animal’, based on her own experience with abuse as a child, or ‘The Neighbor’, the filmmaker manages to pack in a complete, well-rounded story. In that short span, we can count on a slice-of-life fully developed movie that remains within our thoughts for days to come and continues to inspire contemplation. That to me represents the best that cinema has to offer, an insight into our perceptions, our hopes and fears and a way for us to explore both ourselves and the so-called “Other”.

While I often think filmmakers would make the best politicians, I agree with Al Khaja’s Swiss husband who thinks she’d make the most ideal ambassador. For the UAE in general of course, but for exceptional Arab women filmmakers in particular.

Next for Al Khaja is tackling the feature film version of her short ‘Animal’ — which premiered at the Dubai International Film Festival in 2016 — and personally, I can’t wait!

I asked Nayla Al Khaja a few questions to figure out where all that drive, and her incredible vision come from. The result turned into a lesson in life for me.

When you are not making films, what are you doing?

Nayla Al Khaja: Aside from film making, running D-Seven Motion Pictures and The Scene Club, I enjoy spending time relaxing with close friends, exploring new restaurants, traveling, finding inspiration for my next project and, of course, binge-watching TV series with my husband. 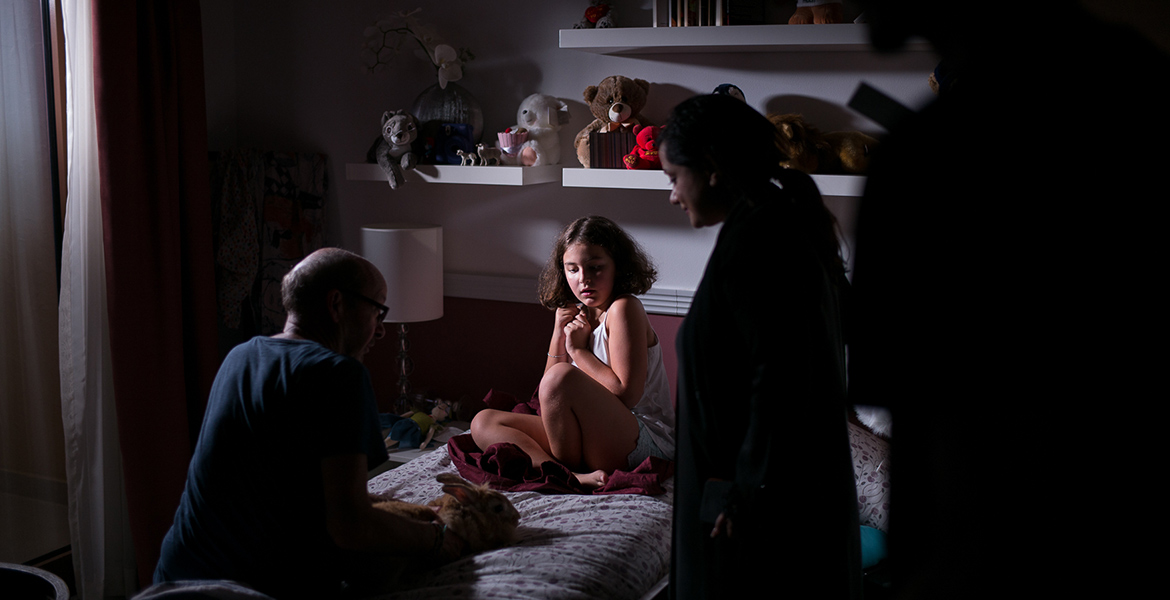 What defines elegance to you?

Al Khaja: Elegance to me is the art of identifying people with solid character and doing whatever it takes to keep them. Elegance in filmmaking, to me, is when all the departments and elements of creating the picture gel perfectly together.

If you hadn’t become a filmmaker, what would you be doing?

Al Khaja: I would be an actress. I will try to be in one horror film before I die.

What was the first film you remember watching?

Al Khaja: My earliest film recollection is a black and white feature called ‘Boot Polish’. The film was about a brother and sister who were on borderline poverty. The sister gets adopted by a rich family while the brother is left behind. This was back in the early days of VHS and I probably drove my parents crazy by watching it for weeks on end.

When you hear “women in Arab cinema” what does that mean to you?

Al Khaja: Arab women in cinema symbolizes a fresh look at film gender equality — in the nascent Arab film industry we thankfully have less gender inequality when compared to other markets around the world. Arab female filmmakers have a bold voice, which has created a more accurate image of Middle Eastern women across the globe.

Who are your cinematic inspirations?

Al Khaja: There are a number of people who have inspired me for different reasons. Abbas Kiarostami, whom I was fortunate to jury alongside, for instance was an amazing mentor during my fledgling years. Whereas, Morgan Freeman once said to me “it took me 25 years to get my big break, and I’m always remembered with grey hair; sometimes all it takes is time and persistence”. I also love the ferocity of Deepa Mehta and the insane meticulous mind of Stanley Kubrick.